Remembering The Classmates That We Have Lost … 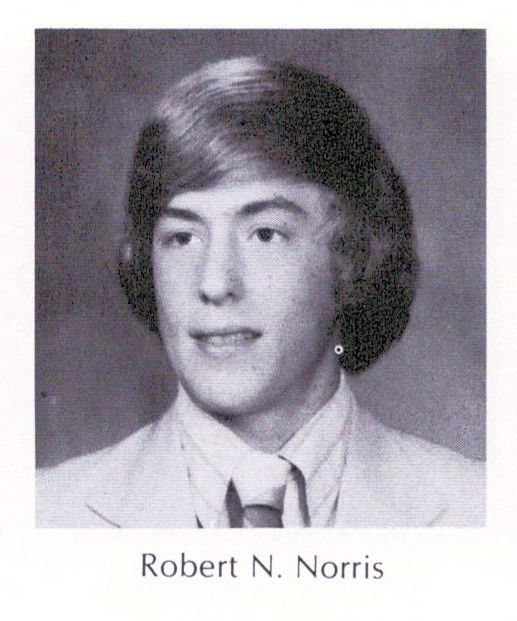 Robert N. Norris, age 51 of Heath, TX, passed away October 4, 2012. He was born November 8, 1960, in Osage County, OK to Thomas Gilbert and Charlene (Nelson) Norris. Robert was a graduate of Upper St. Clair H.S., PA.; Washington & Jefferson College, PA; and Loyola Law School, Los Angeles, CA. Robert is survived by wife Nancy Morrow Norris; sons Jesse Norris and Ryan Norris; parents Tom and Charlene Norris of Heath and brother Tom Norris, Jr. of Garland. Robert was preceded in death by his brother David H. Norris. Robert was admitted to both California and Texas State Bars and was active in the communities where he resided. In Granada Hills, CA he was President of Rotary and a two term President of the Chamber of Commerce. In Heath, TX he served on the Board of Directors for Rockwall County Helping Hands and was active in Boy Scout Troop 314. A complete obituary may be found at www.resthavenfuneral.com. Funeral services will be held 10:00am Saturday, October 13, 2012, at Holy Trinity by the Lake Episcopal Church with Rev. Peter Getz officiating. The family will receive friends at Rest Haven Funeral Home-Rockwall Chapel on Friday, October 12 from 6:00 to 8:00pm. Memorials may be made to Rockwall County Helping Hands www.rockwallhelpinghands.com or Holy Trinity Endowment Fund, 1524 Smirl Drive, Heath, TX 75032.